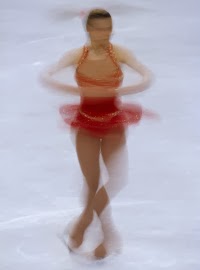 Watching the Olympics, I have seen a commercial that annoys me. It features a figure skater comparing what she goes through to other occupations. One is that she "experiences more g-forces than a fighter pilot". Let's examine that claim.

The forces on the various parts of a spinning skater are due to rotation. However, we will look at the acceleration since that what g-forces really are. For a 5g-force, the relationship between rotation speed (RPM) and distance from rotation center (r) is

A graph might make this equation a little more meaningful. 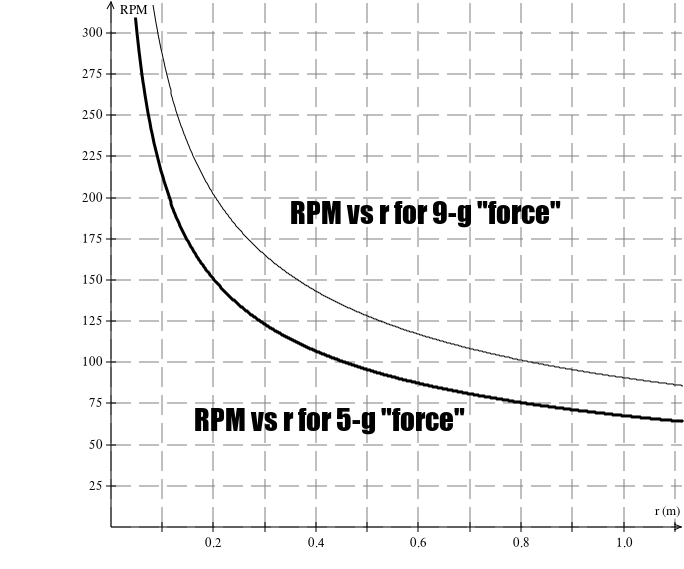 So, we can see that a 5-g force can be obtained for a hand rotating 1 meter from the center at a little more that 60 rpm (or one rotation each second). But the head? Even with a skater's head held straight out at around 20 cm, 5-g's would only be experienced at 150 rpm (over 2 rotations per second). And if we look at a 9-g force which most fighter pilots experience occasionally (and for a lot more than a second), it would take 200 rpm. While the supposed world record for a figure skater spin is around 300 rpm, that skater held her head upright, so her nose might feel a 9-g force, her head would feel a much lower force.

What can we conclude? While it is possible that a figure skater can experience over 5-g's of force on some parts of her body, when was the last time you saw a skater do a rapid spin in competition? So, the ad is true, but very misleading.