Spring has reached Buffalo. The seniors have gone (as a private school, we have figured out that the school runs better if the seniors are not in class after AP Exams and so we let them go). Students are tired of being cooped up in a classroom. How to justify going outside for class. Let's measure the height of a mountain.

O.K., Buffalo doesn't have mountains or even hills. But next to our school is a 170 foot tall building (800 West Ferry). That becomes our mountain. We are then going to calculate its height three different ways, with an equation, with a drawing, and with a computer model.

Some of my students have used an inclinometer (a protractor with a hanging weight) before in a geometry class, so making and using one is not completely unknown to all. However, I know that I will have to review. So we make the inclinometers in class and calculate the height of the ceiling using simple right-triangle geometry by measuring the angle of elevation and the distance to the wall from a starting point. Most teams get obviously wrong answers, so we spend some time to figure out why. We figure out that the angle shown on the inclinometer is the compliment of the angle of elevation. I then remind my guys that whenever you use a new measuring system, you always calibrate that system by measuring some objects whose measurements you know. That was a lesson mentioned way back in September, so most have forgotten it. At least a couple of my guys get a "Oh, now I see why this is important" moment. This activity takes most of a class period.

The next class is spent discussing the difficulties of measuring the height of a real mountain. We figure out that we can't get the measurements for a right-triangle. Some students then blurt out "law of sines" or "law of cosines". I then let them try it out. Some groups will figure out that they will have to use two triangles, but sometimes I have to lead them to that conclusion. If I had an infinite amount of time, I would let them figure out how to do things, but usually I have to give some strong hints so that we get the appropriate equation at the end of this class period.

The next day, we use less than half a class period to make the actual measurements. I have found that it is easiest to give each pair a 50' length of string to serve as their baseline. They then set their own. After each team get 3-5 sets of measurements, we return to the classroom to do the calculations.

I have my guys do each calculation three different ways. One way is to use the formula we developed in class the day before. Another way is to use graph paper onto where they find out that they will have to use an appropriate scale (most groups initially use a scale that is too big for the supplied graph). The third way is to use a computer model. I use Geogebra, but you could use any other system such as Geometers Sketchpad. Below is a picture of this model and then the actual model which you should be able to try. 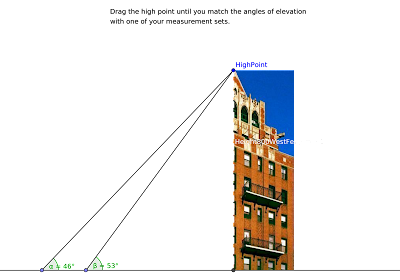 If you are not seeing the interactive feature above, click on the "CanisusPhysics" link above (sometimes more than once).  The advanced feature of Geogebra is not quite stable yet for consistent results.
Or go to the site directly.

Recently (fall 2015), I have started to use the app Desmos (www.desmos.com) in class (see a previous post http://canisiusphysics.blogspot.com/2015/10/linearizing-data-on-ipad.html). I have translated the Geogebra app to the Desmos one which can be tried at https://www.desmos.com/calculator/x8k0s8r4cg.

The idea is that the height should be the same for each calculational method. Most teams will have vast discrepancies. Depending on the time available, I either have the teams redo the measurements and calculations the next day or have them do them on their own time until all calculations are within 10% of each other (it is amusing to see the teams take more time and care in making their measurements the second time around).


As a wrap-up, I like to show the graphic below to show all the work that was done to map the Indian sub-continent. I am still looking to find a PBS Nova program from several years ago that showed how that Great Trigonometric Survey of India lead to the first measurement of the height of Mount Everest. 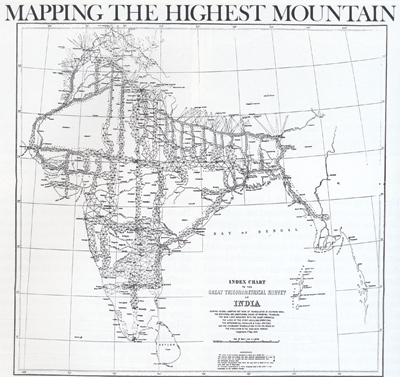 So, now I have a way of letting my guys go outside on a nice spring day while justifying this with myself, my principal, and concerned parents.

When I do this with my AP students, usually early in the academic year, I have them measure distance with their walking stride. We spend some time gathering some distance vs number of steps on the nearby athletic field. They then do a linear regression analysis with their personal data, and use the resultant equation to measure a base-line.
Posted by canisiusphysics