A simple demo, a deep result

Every physics teacher has a favorite way of demonstrating that a horizontally projected object falls toward the ground at the same rate as a dropping body. Some show a video of shooting a monkey falling from a tree. Some have a device that drops a ball at the same time as it pushes a ball outward.

I used to use such a device to introduce projectile motion.  However, I have recently have started to use instead a simpler way thanks to something I learned from from a meeting of the Western New York Physics Teachers Alliance. Using a popsicle stick and two washers or coins, you can have your students do the same. 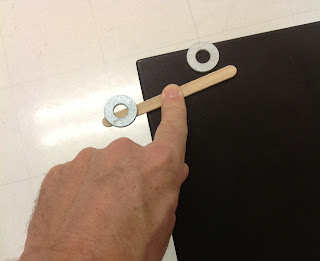 Start with what they think will happen

I like to start with what students "know" will happen. They "know" that an object dropped straight down will hit the floor sooner than an object flicked out horizontally. They also "know" that the faster the flicked object is moving, the longer it takes to hit the ground. I then give each team of two one stick and two washers (you can use pennies or student-supplied quarters). Their task is to figure out how to use this stuff to make one washer fall straight down at the same time as the other washer. I am still trying to figure out how to guide my guys to the proper setup. I give a hint about videos they may have seen about ripping a tablecloth out from under expensive china and fragile glassware. Some take the hint, however, for sake of time, I have to stop the exploration time and lead them to the best setup.

Once we have this setup, I let my guys experiment. It doesn't take long before most teams realize that both washers hit the ground at about the same time. We then get to the basics of projectile motion.

At the end of class, I tell my guys to "confound your parents with this". We figure out that a ruler can be used along with pennies or quarters. I know that most will not do this at home, but a few might. This year, a couple of days later, one guy came up to me after class and said, "I showed my mom this and she didn't believe it so we spent about an hour doing this." One small success.