Saying goodby to a treasured question

Sometimes, you get a physics question that really works, whether as a in-class group discussion, a homework assignment, or an assessment question. One of mine was the Lance question. 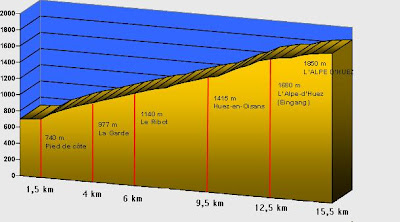 When we cover work and power, I have my guys measure their own power output. While some do this by bench-pressing or squatting weights, and once one guy pushed a car, most do it the simple way by running up a flight of stairs. Most get around 1 hp for for this brief burst (I love the ones who get 12 hp or even 100+ hp. I try to make it a lesson on checking to see if your calculations make physical sense). On the subsequent test, I ask the question:

In the 2001 Tour de France, Lance Armstrong rode up (at a constant speed, equivalent to running up) the mountain L’Alpe Duez (which is 3500 feet high) in 38 minutes.  His weight (with bicycle) is 180 pounds.  What work did he do in lifting himself up L’Alpe Duez?  What was his average power (in horsepower)?

The answer is around 0.5 hp. I would then during the test review compare his power output to the student's. Most would recognize that their output was for only a few seconds, whereas Lance's was for more than half an hour. I would then tell the class that this was the third climb of the day, the previous two almost as high. Then I would tell them that the climb occurred at end of a 100+ mile race and that it was the 11th day of racing. Some students would be impressed by that athletic feat.

It was a nice way to relate a calculation that we do in class to real-life. However, with recent revelations, I can not with good conscience include this question in future classes. I recognize that performance enhancing drugs will give only about a 10% boost in output for athletes at that level, but most students would not recognize that distinction. I will miss using this classic example.

This post has my replacement for the Lance question.