You have to get a Raspberry Pi 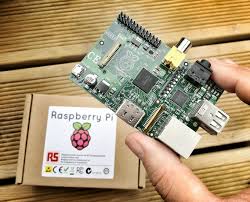 The Raspberry Pi computer has the optimal combination of price and power. While it will  not replace your laptop or desktop, it can do a lot for the price of week's worth of Starbuck's coffee.

If you want to use the Pi as a standalone computer, you will need a keyboard, a mouse, a power source, and a monitor (as long as it has an HDMI connection). Unless you have these hanging around, the Pi might not be worth the trouble. But you can do a lot with the Pi even with out the extras.

Since the Pi was first let loose on the world, many people have made different variants of the main operating system (OS) that can be used. Imagine a version of Windows tailored for high school teachers, a different one for senior citizens, one for bankers, etc. The general purpose OS for the Pi is Raspbian. For those familiar with Linux or even Windows or OS X, it will look familiar (what you see above). If you plopped  most people in front of a monitor showing the above, they could figure out what to do within a few minutes. But what can you do without a monitor?

As with any computer, the Pi can be run "headless", in other words, without a monitor. While it requires that the Pi is connected to your home network and that you know how to find its IP address. You also need to know how to use SSH and VNC on another computer. There are plenty of sites available to help you. Here is a good one. This is the main use of my Pi so that I can listen to internet radio stations like Xponential Radio and WQXR2 (Living Music, Living Composers).

What is also nice is that the OS is stored on an SD card. That means that you can easily swap cards and have another OS for your Pi. One that I am currently trying is one that make your Pi a high-end audio server. While it is still in the development stages, it has promise, and when I want to do something different, I just pop out that card and put in another one.

Another use for the Pi is as a video media server. Since it has an HDMI output, you can connect it to any TV with such ports. One such distro is Raspbmc. I have not tried it yet since I am still in the stone ages with TV (it's a CRT). You can see a list of other distros can be seen here.

It can be hidden.

One last use that I want to mention. Since the Pi is small, it can be tucked away in the corner of a typical academic office and not noticed. I did that to a colleague, and attached some old computer speakers turned up loud. Since the Pi was connected to the school's network, I could control it from my laptop in my room at the other side of the building. At a time when I knew he was alone in his office, I started the Pi playing some hideous Christmas music. After an initial fright, he knew who to blame. At least he didn't crush the Pi.
Posted by canisiusphysics