A Question Leader's job has changed some in 2020 and 2021.  But one thing hasn't; writing the same phrases over and over.  Here's a hint.  Let AutoCorrect help you.

Once I have these all these explanations for every point, I now start to use Auto-Correct.  I highlight the generic sentence I will use for saying the student got point a1 and chose a short phrase that I know will never be seen in normal text, in this example “a1y".

Going to Word-Preferences, I get the box below and I chose "AutoCorrect". 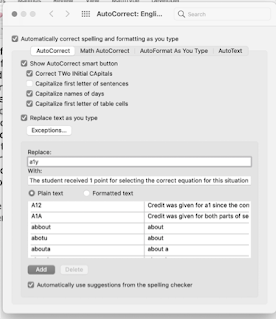 The box below opens up with the highlighted sentence already populated in the appropriate box.  I then chose a short phrase that I know will never be used otherwise (here it is a1y for yes for point a1).  Now, whenever I type "a1y" in a document, I automatically get that long sentence.

I do this for each of the yes and no sentences in the document.  Now when I want to get the Annotations for a particular response, I just open a blank document, and start typing a1y a2n2  b1y b2n b3y etc. and each of those shortcuts are replaced with those longer sentences written previously.  If the generic explanations are good enough, I just do a select all - copy - paste into the Annotations window on the ONE server.  Formatting does not seem to be preserved (it was last year, hopefully it will be so this year), so if you have subscripts, bolding, etc, those will not copy over.

Even if I have to modify some of the explanations for some of the responses, I still find I save time in writing all those Annotations I need to do for this year's Reading.